50 years ago a movie changed everything.

It’s safe to say that there’s no other science fiction movie which has captured the imagination of fans & critics for these many years like this masterpiece of Stanley Kubrick & Arthur C. Clarke has done.

Within a decade from the release of his first novel ‘The city and the stars (1956)’, Clarke had earned himself a name among hard science fiction writers.

His 1951 short story ‘Sentinel of Eternity’ in which a beacon planted by ancient aliens is activated by modern humans & other similar works served as a inspiration of 2001: A Space Odyssey movie directed by Stanley Kubrick & the novel of the same name authored by Arthur C. Clarke. 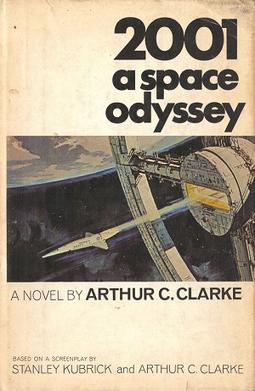 Though Clarke & Kubrick collaborated on the screenplay and the novel in parallel, their relationship were rather tumultuous; as Kubrick edited out scenes which were of value to Clarke & the novelBuy getting published after the release of the movieBuy with Clarke as the sole author.

Just like Clarke, Kubrick; after a series of successful short movies & small feature films as a director, screenwriter & producer was propelled to stardom with series of Hollywood hits like ‘Spartacus’, ‘Lolita’ & ‘Dr. Strangelove or: How I Learned to Stop Worrying and Love the Bomb’.

Kubrick could now take on a larger landscape which which will captivate the minds of the viewers like no movie has never done before. He joined hands with Clarke to create 2001: A Space Odyssey, a time-less classic which still gives rise to new fan theories 50 years later.

By the way, Kubrick just didn’t cut scenes which Clarke felt is crucial for the movie, he discarded entire sound track composed by <strong>Alex North</strong>of Spartacus fame; just because he like the temp music put in the place to be replaced with actual sound track better. Well, Kubrick is known as one of the greatest movie director & not the best person to work with though!

Since Kubrick is adamant about letting the audience deduce the inner meaning of his movies, 2001 is not different; in-fact it is perceived as the primary reason for friction between him and Clarke. As Kubrick believes in the audiences interpretation, Clarke insists on scientific clarity in his works.

Fortunately, both got what they want with Kubrick getting what he wants by make a movie with awe & wonder; Clarke explaining the story his novels in depth.

Kubrick avoided any direct questions about the meaning of the movie to protect his interest of varied interpretations, but in an interview to Playboy magazine he said that theological concept is at heart of the 2001 but not in a anthropomorphic or monotheistic way.

The moment the Monolith is activated | Credits : Warner Bros. Entertainment Inc. via GIPHY

Critics have pointed out to the several allegorical interpretations of the movie. For the depictions of the Monolith aiding in the evolution of the mankind, it’s been attributed to Friedrich Nietzsche's <strong><em>Thus Spoke Zarathustra</em></strong>_ & _The Birth of Tragedyfor the depiction of the HAL 9000 as an Apollonian entity_. _The spaceship’s journey and the birth of the **Star Child **has been compared to the physical act of conception.

Though the Monolith has been subjected to various interpretations as well, Clarke has definitely stated it to be tool of advanced alien civilisation for the purpose of advancing intelligent life.

Technology is the core of 2001, some critics even argue that it is at the expense of character depth; nevertheless Kubrick’s obsession with elaborate sets & cinematography has produced a visual treat with eerily accurate futurism the world hasn’t witnessed in 1968. Remember that the movie was conceived, produced with much delay (arguably for the good) & released before humans landed on the Moon for the first time !

Thanks to Kubrick's collaboration with NASA scientists, the space suits, space ships and space stations were of perfect scale & so were the Facetime’ish video calling facility or the in-flight entertainment systems to mention a few.

But the real star is the calm spoken sentient (or is it?) super computer **HAL 9000, **the antagonist of the movie. Kubrick’s meticulousness in finding the right voice for HAL, which he did with Douglas Rain; is evident from all the modern personal assistants from Siri to Alexa being modeled after it.

I haven’t included a spoiler alert in this writing because, I believe how much ever the movie is written about; it couldn’t be spoiled for the viewer. So, if you get a chance to watch the movie in its 70mm glory; don’t wait.