Are we worrying more about AI than global warming

So, my friend said this — 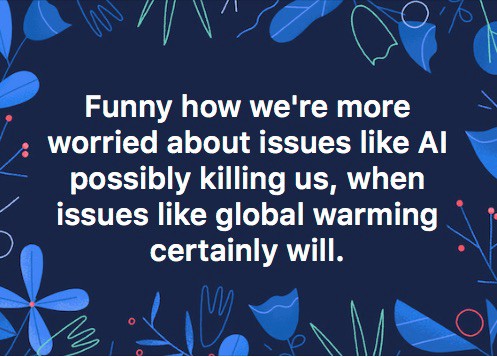 If I may state mine — It’s not we’re more worried about AI, it’s the media inducing cognitive biases fuelled by Hollywood when a celebrity speaks about dooms day AI. Let’s discuss some facts,

Let’s take prof. Hawing, he’s vocal about the need to keep AI research in check and more importantly he has blatantly expressed his views on climate change; to the point that he directly vilified the most powerful person on the planet.

Or let’s take Elon Musk, who’s statements on AI are being widely circulated. But, did he speak only on that? In-fact he walked out of president’s business advisory when the former quit from Paris climate agreement.

My perspective on the technical angle of this argument :

IMO : AI is a layman term. The thing which we should be concerned about is ‘Intelligent machines’. No human can excel at all skills, like wise it’s absurd to expect a machine to do so; so we needn’t worry right? I don’t think so, intelligent machines are already there. We need not bother about a washing machine becoming more intelligent to solve it’s problem, but we should be of an intelligent drone carrying hellfire.

Defence : More funds are being poured into intelligent ballistic defence programmes than ever before because say even a system like THAAD (Terminal high altitude Area Defence) is not guaranteed to protect against hundreds of dumb missiles. For the sake of brevity I’m not going to geo-political current scenario.

Algorithms & data : Any one with good understanding of computational mathematics and computer architecture can write decent ML algorithms, but algorithms are useless without large data. Few private conglomerates & govt hold large troves of data which put them at superior advantage when it comes to building intelligent machines but current computational limitations doesn’t let them build something which media loves — ‘ Super AI’. So we should be safe for another 40–50 years right? Nope, here comes,

Quantum Computing : Media generally ignore QC when talking about AI because, let’s say the fact : There aren’t many who understands what it is and in fact the physics behind the same is still nascent. But, private sector companies discussed earlier are already on the verge to announce ‘quantum supremacy’ end of this year ! I.e any problem beyond the capabilities of a traditional computer, even one with no practical value, can be solved on a quantum computer. I’ve just mentioned private sector, let’s not be so naive to say that govt’s doesn’t posses such computers already.

Even without quantum supremacy, quantum computers have demonstrated to run specific problems very efficiently than classical computers. So it’s just a matter of time (if not already) intelligent machines get huge overhaul and the issue here is that it will happen inside close doors of few powerful companies/governments.

This is where people like Prof.Hawking, Elon play a role in urging the need for an open system which vets AI research and they do so in layman terms for obvious reasons.

To summarise my stand :

1. Are we worrying more about AI, than climate change. No, it’s cognitive bias. More research are being done on climate change, govt’s have ratified Paris agreement. As for harmful effects of AI; few important people are vocal about it. That’s all.

2. Are we worrying enough about climate change, No we should be. It’s unfortunate that ‘climate change’ has become a political tool.