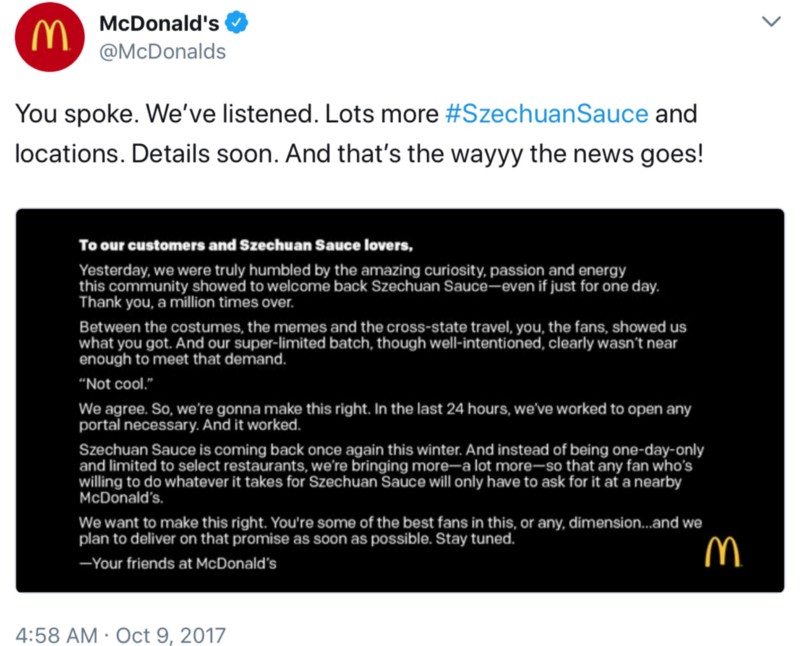 The #SzechuanSauce fiasco with McDonald’s is a very interesting (successful ?) example of scarcity marketing and targeting intellectuals for generating bandwagon effect.

Some BG : Rick and MortyBuy, a science fiction animated show with the philosophy of cosmic pessimism, existentialism, nihilism, absurdism etc. and is hugely successful.

Which by itself is very interesting, considering products aimed at intellectual population alone is seldom successful and RnM actually leads its category. I would attribute it to well written storyline, as the creators take years to bring in each season; but the analysis of RnM is for another day.

Today I would like to discuss the szenchuan sauce, in one crucial episode where it seemed the audience would be revealed the life’s purpose of the show’s main protagonist- Rick; it takes a twist (like always) and attributes Rick’s purpose of life to find the out of production McD’s Mulan SzeChuan sauce ! Probably as a joke on people’s absurd. gratification’s, nevertheless it was well received with RnM fans.

McD fiasco : Sensing the opportunity for niche scarcity marketing, McDonald announced the availability of SzeChuan sauce at it’s outlets & as expected RnM fans flocked to it; only to find that the sauce was available only at select outlets in limited quantities. But what’s really interesting is, that the ‘bandwagon effect’ caused people who haven’t seen RnM or haven’t tasted SzeChuan sauce earlier to flock at McD as well !

At certain locations police had to be called in to control the angry crowd who didn’t receive their sauce and with the surge in demand, McD announced that they will make more of it available in future.

Companies do target intellectuals when they announce a new segment of products, as they are usually the early adopters (Facebook in Harvard, Android among enthusiasts) but subsisting on them for ever hadn’t been successful revenue generator (Twitter, Reddit). But things could be changing with the new GenX population, can’t say it for sure without actual data points – an interesting experiment for getting schwifty another time.