This is a physical scam mail alert yeah because we don’t get enough of cyber phishing; right!

Those who have filed international patents, keep an eye out for mails such as the above. I received a professional looking mail from IPTI & from what it looks like on the envelope it’s been sent from The Netherlands.

Since we have filed international patents it’s not unsual for us to receive communication from concerned organisations but I know for certain that there’s no IPTI (International Patent & Trademark Index) involved with patents.

The letter inside is perfectly crafted to fool someone who’s not aware of the organisations which takes care of international patents and those who are expecting an invoice for their patent fee. 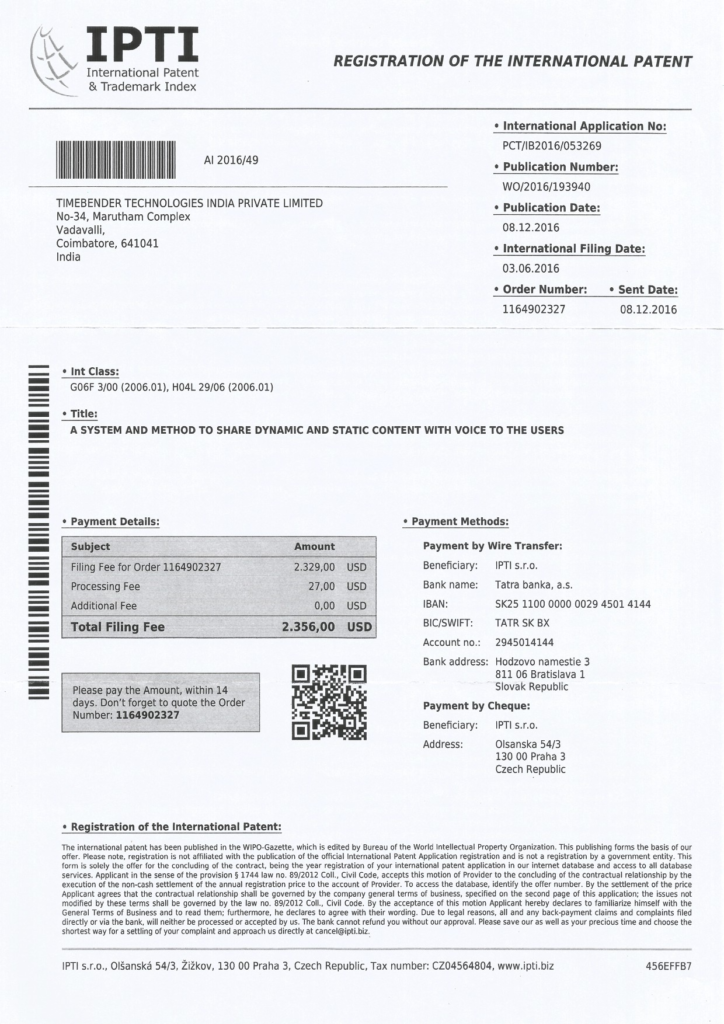 Yes, all details of the patent ( Application no, Filing date, Title) are all correct & taken from publicly available data. In-fact our product larynx is available for public consumption & uses parts of the invention for which the patent has been filed.

The subject of the letter is requesting payment of fee for about **$2356.00 **. The letter also mentions that the payment has to be main in 14 days from the date of receiving the letter (good strategy to add authenticity). I had received the mail in 9 days if the sent date is real.

As mentioned earlier, the biggest give away it self is the orgranisation which the letter claims to represent — IPTI. International patents filed under PCT (Patent Cooperation Treaty) are processed by International Bureau of World Intellectual Property Organisation (WIPO) located in Geneva, Switzerland.

The second give away should be the address of the beneficiary IPTI s.r.o from Czechoslovakia, no offence to the people living there; but Czechoslovakia has nothing to do with WIPO & IPTI is nothing but a scammer’s vivid imagination for making you believe that it is related to your patent.

The QR code looked interesting, so what did it hold? 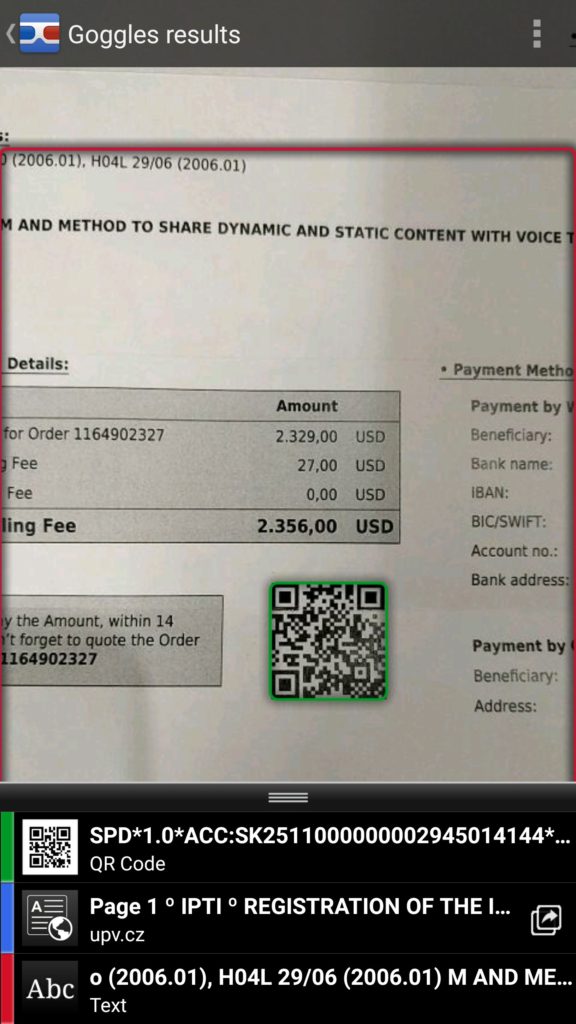 A whois look up gives these registration details for the domain upv.cz 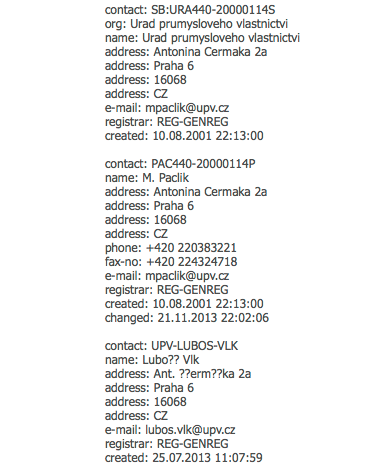 There’s a chance that this is the real address

Anyone who has hosted a website before knows that you can give any details for RABT (REGISTRANT, ADMIN, BILLING AND TECHNICAL) unless forced by the registrant to enter actual details due to local government laws. 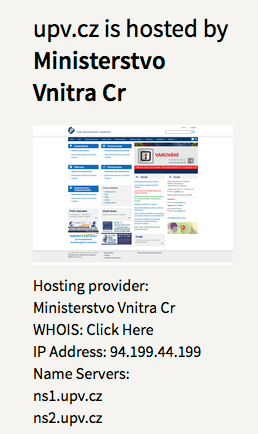 Hosting lookup of the scammer

Ministerstvo Vnitra Cr looks like shared VPS provider and it’s highly likely they don’t monitor what their customers are up to. I don’t want to dig further into upv.cz’s host as it could host other genuine sites as well.

Talking about genuineness, what these guys are doing is plain scamming but is it really illegal?

The footer of the letter holds some interesting information,

It says, it has nothing to do with WIPO

The content in the footer says, it has nothing to do with WIPO and the details available in the content are scrapped from actual database.

Let’s look at the back side of the letter - 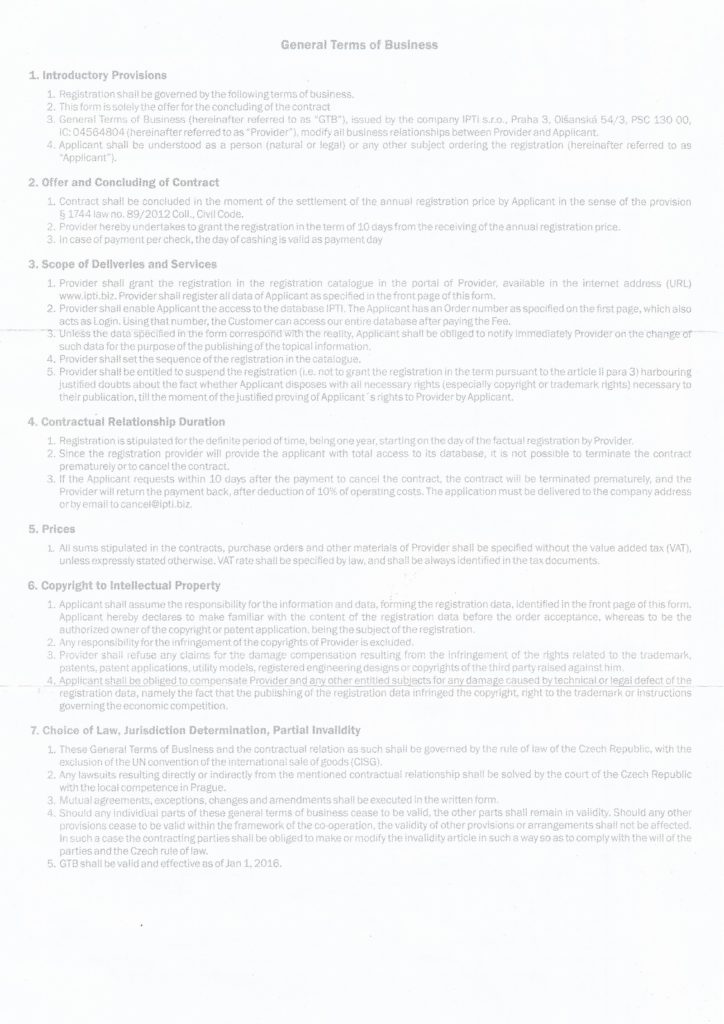 Back side of the letter has terms and is printed with lighter font color.

To cut it short, in semi-professional terms what they say is that ‘you are paying for patent details which are publicly available’. Yes, your patent details which you know yourself are scrapped from Internet and is provided to you and you’re made to believe that you are paying a valid fee to an international organisation concerned with your patent.

reduce the time required to register the intellectual property!

The website looks like a failed IP services agency, which decided to scam people; yeah because why not? right.

They don’t seem to use the term **WIPO **in the way they would probably violate trademark.

So it’s basically like since you didn’t read the letter properly we are going to screw you.

I’m sure many have fallen victim for this scam & would have come to the notice of the WIPO, so I checked their website and found that there’s a specific advisory on this regard.

IPTI is just one of the fake names used by the scammers, there are dozens of other similar names used by these organisation to pretend that they have something to do with processing PCT (or they don’t in their terms).

We deal with phishing in our Infosec work every day and it was easy for me to spot that this is an elaborate scam to trick us into paying, but for someone who doesn’t have an idea about how PCT works & don’t poses critical thinking; this might lead to serious consequences.

Information and awareness is the best defence against these type of scammers. Also don’t be gullible.

Jarett has bought a Coffee for The Tallest Dwarf. Here are the other supporters.